Here’s a question, one which nobody in the Tory press or among the Tory rentamouths seems capable of answering …

What is the surplus in the Teachers’ Pension Fund?

Strictly, of course, there isn’t one. That’s because the Treasury simply snaffles the deductions and trousers the contributions. It is a “notional” fund, which exists only on paper.

A more recent figure would, therefore, be welcome.

Bought and paid for?

What David Cameron does to the traditional rules of debate in the Commons should be everybody’s business.

Earlier this month we had this in PMQs:

The Prime Minister: The best that can be said about this performance is that—quite rightly—the right hon. Gentleman [Ed Miliband] was not thinking about politics on his honeymoon. On waiting times, what actually matters is the time people wait and median waiting times are down. That is what has happened in the NHS, and that is something that he misled the House of Commons about a fortnight ago—

Mr Speaker: Order. I know that the Prime Minister will be a follower of parliamentary protocol, and he will not suggest that the Leader of the Opposition misled the House of Commons. I am sure that he will withdraw that remark.

The Prime Minister: What I meant was that the right hon. Gentleman gave an interesting use of facts on waiting times, which are down in the NHS. What we are seeing today is simply empty opposition and weak leadership. That is what we get from Labour.

Notice that Cameron did not, as instructed, “withdraw that remark”. He got away with it. So, an accusation of lying: were that to be proven, it would be automatic resignation.

Yesterday he had these two:

I note that we are 26 minutes into Question Time yet we have not heard a squeak from Labour Members about strikes, pensions or the need for reform. Because they are all paid for by the trade unions, they cannot talk about this issue.

The first is an arrogant rant. Both are accusations of corruption.

The Commons briefing on parliamentary language is tightly written:

Language and expressions used in the Chamber must conform to a number of rules. Erskine May states “good temper and moderation are the characteristics of parliamentary language”. Objection has been taken both to individual words and to sentences and constructions – in the case of the former, to insulting, coarse, or abusive language (particularly as applied to other Members); and of the latter, to charges of lying or being drunk and misrepresentation of the words of another. Among the words to which Speakers have objected over the years have been blackguard, coward, git, guttersnipe, hooligan, rat, swine, stoolpigeon and traitor. The context in which a word is used is, of course, very important.

Cameron is playing fast-and-loose with the rules. he is being encouraged to do so by the Tory Ultras, who have issues with Speaker Bercow and seek to diminish him. The Tory press, having invested heavily in Project Cameron, are in on the act. There’s Tim Shipman in the Daily Mail:

Tory MP Rob Wilson said: ‘There should be an election at the start of each Parliament so the Speaker has the backing of the House…”

There were audible gasps when the Speaker showed such disrespect to the Prime Minister. Many colleagues are very concerned that the Speaker uses Prime Minister’s Questions, which is shown around the world, to act in such a high-handed and disrespectful manner.

“Disrespect”? And then there’s Andrew Gimson in the Telegraph, reducing PMQs to bare-knuckle blood sports:

When one Englishman wishes to insult another, he treats him with supercilious politeness. The Speaker, John Bercow, silenced David Cameron with the words: “We’re very grateful.”

Mr Bercow was not, of course, in the slightest bit grateful. He thought the Prime Minister had wandered too far from the subject and gone on for too long, so he gave him a smack in the face.

Mr Cameron was furious. He sat down with exaggerated slowness and shook his head. For a moment his demeanour recalled that of Mr Darcy, in Pride and Prejudice, when confronted by behaviour of unspeakable oikishness.

But in the cruel world of Prime Minister’s questions, it never does to behave like a victim. Whatever else you do, you have to show you can stand up for yourself.

For Mr Darcy, read “Flashman”, whose younger version (by Thomas Hughes, rather than George Macdonald Fraser) seems to fit:

Flashman, be it said, was …  played well at all games where pluck wasn’t much wanted, and managed generally to keep up appearances where it was; and having a bluff, off-hand manner, which passed for heartiness, and considerable powers of being pleasant when he liked, went down with the school in general for a good fellow enough. Even in the School-house, by dint of his command of money, the constant supply of good things which he kept up, and his adroit toadyism, he had managed to make himself not only tolerated, but rather popular amongst his own contemporaries… But the wrong sort happened to be in the ascendant just now, and so Flashman was a formidable enemy …

Meanwhile Anne Trenemann for The Times concurs with Cameron that he, and he alone, should dictate both questions and answers at PMQs:

Strike, strike and strike again. That was Dave at Prime Minister’s Questions…

Dave struck first. For once, he had a plan. The first question, planted, was from a Tory MP: “Will you condemn the strikes over and over in a very loud voice?” (I paraphrase). He would!..

As Ed sat down, riding the crest of frenzied Labour screams, Dave struck again, using his Absolutely Furious voice. “What the whole country will have noticed is that at a time when people are worried about strikes, you cannot ask about strikes because you are in the pocket of the unions!”

The story about JFK’s turtles is getting a whale of coverage in the UK press. The authentic story, though, is from AP, via the WSJ or, dressed up with a little reportage by Andy Newman for the New York Times City Room blog:

Some flights were delayed for up to 30 minutes, said a spokeswoman for the Federal Aviation Administration, Arlene Salac, but not too many: the runway is used relatively infrequently this time of year because of seasonal prevailing-wind patterns.

The runway becomes a turtle crossing every year around this time as the terrapins gear up to reproduce.

“They look for sandy spots to lay their eggs,” Mr. Kelly said, “and there is an ideal location on the other side of Runway 4L. They come out of the water and cross the runway to lay their eggs in the sand.”

Wildlife specialists for the Port Authority and the federal Agriculture Department relocated the turtles to an equally nestworthy area on airport property out of harm’s way, officials said.

“We just take them to a part of the airport where they can keep traveling west, but in a safe direction,” said Allen Gosser, assistant state director for New York wildlife service for the department.

Good to know there are “specialists” for such eventualities. Good, too, for the top Reader’s Comment to be:

The very definition of a slow news day.

That might be verified by the headline NY Times story today being by Sarah Lyall:

Hundreds of thousands of teachers and public-sector workers across Britain walked off their jobs on Thursday to protest the government’s proposed changes to their pension plans. Union officials warned that this could be the beginning of a wave of strikes this summer and fall over pensions and public-sector budget cuts.

As for the turtles, that’s a bit different to local experience.

The official reason for the closure of Nutt’s Corner as the airport for Belfast, and the short shift down the road to Aldergrove, was the tight descent and steep take-off. Popular legend, however, has it that pilots objected to umpteen hares’ eyes gleaming back from the landing lights. When the authorities closed Nutts Corner, the hares promptly debunked to Aldergrove. They remain one of the things Malcolm looks for, and the hares generally oblige, to make it a kind of home-from-home coming.

Now, anyone for crunching through the periodical cicadas?

Haven’t we met before?

While we’re with the current issue of What’s Brewing, there’s this ad on the front page:

That’s either Gino D’Achille or a demn’d good imitation. For example: 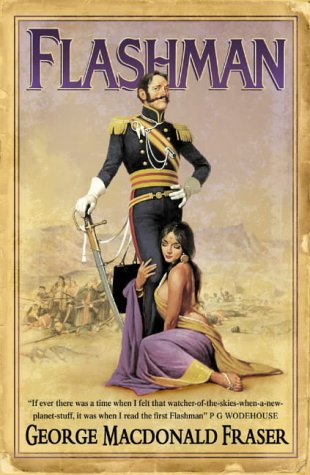 Which raises some awkward issues about traditional virtues and honesty, as this, also from the front page of What’s Brewing: 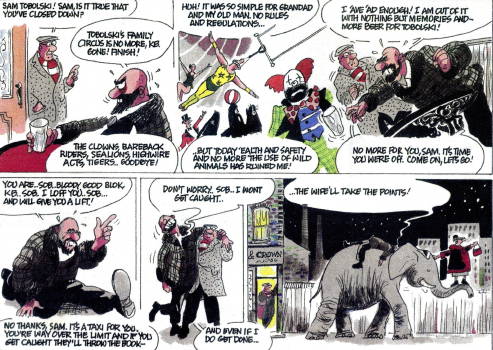 Bill Tidy truly is a National Treasure. His moustached, be-scarved and be-capped gents have been with us since the glory days of :

Now the quota is down to Keg Buster (as above), who appears on the back page of the CAMRA monthly, What’s Brewing.

When one Googles “CAMRA”, the Google map that comes up alongside features that well-known road between Barnet and the M25, the famous Trotter’s Bottom. Hmmmm….

So, where else could one find so pertinent a conflation of two recent political stories:

A short while back, Malcolm’s grandson (aged seven) returned from school, all fired up.

He had been chosen for the advanced language development group.

He informed his parents:

And then there’s this as the headline story on Political Scrapbook:

Way, way back in November of last year, Malcolm got waxy with Haringey’s Planning Enforcement. In all this time he has not received as much as an acknowledgement.

So, out of devilment, here goes again:

A week ago you received the following:

Out of bloody-mindedness, Malcolm looked up The Town and Country Planning (Control of Advertisements) (England) Regulations 2007.

He is severely vexed;

He has a gripe;

He is otherwise not engaged; and

It is a wet, grey, miserable November day in Norf Lunnun.

Despite the usual impenetrable parliamentary draughtsmanship, this is what Malcolm thinks he learned:

Class 3A of the rules and regulations seems the key bit which refers to estate agents boards (which is his current hate);

A board can be displayed if a property is for sale or to let;

The board ought exceed half-a-square metre in size;

Only one board can be displayed for a single property, and the board must be on that property, not on the verge or on a communal area;

and, naturally, there are all kinds of other restrictions.

Why are there scores of signs which boast a particular property has been sold or let?

Why do other boards exists for months, and in a couple of egregious cases for years (vide: above Sainsbury’s, Muswell Hill), advising that the property is “let and managed” by a particular firm?

Why does the local authority take no action?

To date you have not felt able to honour this with even an acknowledgement of receipt. Malcolm assumes, therefore, that either he has mistaken the regulations (and you are too polite to correct him) or they do not apply in the London Borough of Haringey.

In the course of today’s errands, Malcolm wandered from Muswell Hill Post Office to Sainsbury’s in Fortis Green Road.

To help you further in any efforts, he noted signboards declaring that the premises had been “let by” or “let and managed by” a particular firm. As far as Malcolm reads the regulations, all of these seem to be irregular:

two separate boards (i.e. four sides) above Sainsbury’s, 12-14 Fortis Green Road (these have been there for a considerable length of time, possibly years);

the former premises of Quicksilver, ?150 Muswell Hill Broadway (which may also be in breach because of size);

There are also the decaying remains of the wooden supporting structure for a board above Everbest, 388 Muswell Hill Broadway.

Should any of your officers venture down the residential Muswell Hill Road, a further rash of similar boards will be evident.

This is being posted at https://redfellow.wordpress.com and copied to the Ham & High.

This is again being posted at https://redfellow.wordpress.com and copied to the Ham & High.

Many, if not most of those boards listed above are still there. Plus other additions.