Linnet: A small, slim finch, widely distributed, and once very popular as a cage bird because of its melodious song. [RSPB]

One of the benefits-on-the-side of removal to York is MP-swapping the benighted Lynne Featherstone for decent Hugh Bayley.

It doesn’t prevent the Featherstone self-exculpation emails getting through.

This morning’s is a gem of the genre. It deserves repetition (and annotation):

The Government motion was defeated last night and so was the opposition amendment [Gosh! What a revelation! Was that also in every morning paper and news broadcast?].

I supported the Government motion because it proposed waiting for the UN weapons inspectors to finish their work and for the United Nations Security Council to consider their findings. [So did the Labour amendment, and she voted against that.]

The motion also proposed ‘that every effort should be made to secure a Security Council Resolution backing military action before any such action is taken’. [Whereas the Labour amendment modestly required “the Security Council must live up to its responsibilities to protect civilians”. And that wasn’t enough for Ms Featherstone?]

Most crucially the motion gave an absolute commitment that ‘Before any direct British involvement in such action a further vote of the House of Commons will take place.’  That vote would have happened next week, after the weapons inspectors had reported back. [Again, the Labour amendment merely provided: “the Prime Minister reports further to the House on the achievement of these conditions so that the House can vote on UK participation in such action.”]

Because people have asked my position, let me make it clear that, in that second vote, I would have voted against military action unless it was supported by the UN – and indeed resigned from the front bench if necessary. After the government defeat last night, I don’t believe there will be a second vote – but my position remains the same. [Phew! That let’s the lady off a hook.]

I am an internationalist and the use of chemical weapons is a war crime. We must use the international bodies that uphold international law – or else we have nothing. [Except Santa Claus and the Easter Bunny.]

Furthermore, I am not persuaded that the sort of military intervention proposed – that of surgical strikes – would have made things better rather than worse. [Note carefully: she believes in “surgical strikes”, despite repeated proven failings, and concomitant civilian casualties, on previous adventures.]

I very much hope now that the international community will strive to find a diplomatic route with urgent and redoubled efforts. Assad and other such people should not take the vote last night as a green light on atrocities. [Trite, woolly and unconvincing. It would be refreshing to find a LibDem unquestionably in favour of undiplomatic and lethargic effort, and wholly shilling for indiscriminate atrocities.]

Is this a Lynnette composition, or, as so often, is it a boilerplate effort from LibDem and/or ConDem Command?

Now to the broader issue of the LibDem performance.

Last night, thirty-three Lib Dems voted for the government’s motion; 9 voted against; one abstained and 14 did not vote.

Which raises questions about a declared abstention (Paul Burstow, since you didn’t ask) and “Oh, I can’t be arsed” absentees.

The thirty-three hung-ho, let’s go with the neo-Cons, were:

To put it in context: half (well, it looks like sixteen) of the bombers-and-shooters were pay-roll vote. Some of the others seem to be ambitious greasy-pole-climbers. Add in a couple of garrison-town MPs. All highly-principled, no doubt.

But Liberal? Hardly! Democratic? Not on this occasion.

Now, where else can we look for a linnet?

Well, Yeats, of course, praying for his daughter. Seems peripherally appropriate on the day of Famous Seamus’s death. Also vaguely appropriate to the Featherstone theme (Geddit? Feather!) And can certainly be read out-of-context but relevant to the Great LibDem Betrayal. Above all, though, because Malcolm can never resist a bit of WBY:

In courtesy I’d have her chiefly learned;
Hearts are not had as a gift but hearts are earned
By those that are not entirely beautiful;
Yet many, that have played the fool
For beauty’s very self, has charm made wisc.
And many a poor man that has roved,
Loved and thought himself beloved,
From a glad kindness cannot take his eyes.

May she become a flourishing hidden tree
That all her thoughts may like the linnet be,
And have no business but dispensing round
Their magnanimities of sound,
Nor but in merriment begin a chase,
Nor but in merriment a quarrel.
O may she live like some green laurel
Rooted in one dear perpetual place.

My mind, because the minds that I have loved,
The sort of beauty that I have approved,
Prosper but little, has dried up of late,
Yet knows that to be choked with hate
May well be of all evil chances chief.
If there’s no hatred in a mind
Can never tear the linnet from the leaf.

Tagged as LibDem voting on Syria

My, my! Doesn’t time fly when you are involved in moving home?

The interim since that previous post? Somehow reminiscent of Julius Caesar, Act II, scene i (as learned by heart in Dublin’s High School, circa 1960):

Between the acting of a dreadful thing
And the first motion, all the interim is
Like a phantasma or a hideous dream.
The Genius and the mortal instruments
Are then in council; and the state of a man,
Like to a little kingdom, suffers then
The nature of an insurrection.

Yes, it’s been a house-removal.

Malcolm is no longer ensconced in bourgeois London N10, among the Muswell Hill pseudo-intellectuals and City (smaller) bonus boys. He now resides down the road from the ancient City of York’s Bootham Bar. 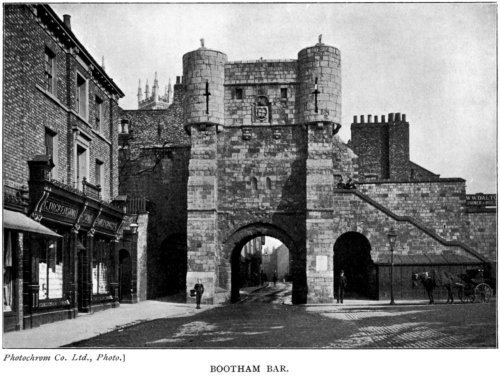 Hark! In the fastnesses of the night, can that be the iron-nailed trudge of a ghostly Roman troop, exiting the legionary fort via Porta Dextra, next stop-over at Cataractonium? Err … sadly, no. It’s the early Friday morning municipal refuse collection.

This whole summer, the British (read English. No: read “Home Counties” English) have been bombarded by the Tory Press, egged on by daily bulletins and utterances from Tory Central, to believe that Ed Miliband is “weak”, and the Labour Party in disarray.

Despite the generally even weather, and a holiday season, the well-established Labour opinion-poll lead was only slightly dented. 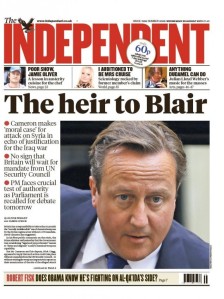 So Dave Cameron, allegedly inspired by his oh-s0-well-educated and informed spouse (which outré suggestion required an official denial), was gung-ho to blitz Syrian citadels. Thus Parliament had to be recalled to rubber-stamp the bombing.

The Independent, quite wittily, headlined this with a cruel twist of headline (as right).

“Hold hard”, said everyone of sense.
“Hang on”, said the Labour rank-and-file.
“That goes for me, too,” said Ed Miliband. “We need to hear it from the UN”.

And so it came to pass that the Tory fizz went flat. The Recall of Parliament will now debate the UK’s referral to the UN.

With a single bound, Our Hero (Ed) was free. The egg was all over the ConDem faces — for even the Clegg, the one-time Great Pacifier now established as “Deputy PM”, had been clambering on the war-wagon.

Not quite 1956 over again. Nor quite the principles of Gaitskell over Suez (Miliband has far more, far broader support than just the Observer). But a stike for reality and decency.

And where does that leave Cameron?

Well, as Malcolm has noted before, Cameron has precedent here. So let’s recall a previous Greatest Hit:

Said Prince Fred is generally accounted to have been the Grand Old Duke of York, who:

He earned that reputation because of the futile Flanders campaign of 1799.

Doubtless the dissenters on the Tory backbenchers, kept quiet of late by the prospect of potential promotion in the imminent reshuffle, will hold against Cameron this Recall and their abbreviated summer hols. Particularly so when any ambitions are disappointed.

Oh, and Malcolm’s other good news is that York is much on a level. No hills. Nice walking. He’s even thinking of taking to a bicycle (even electric-assisted) again.