This follows from that previous, on Humphrey Gilbert. It, too, has had an outing on politics.ie. 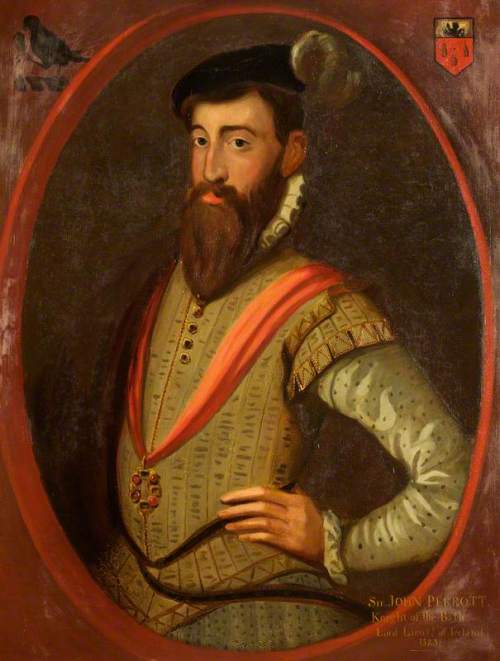 Gilbert’s successor in Munster was Sir John Perrot (1528-1592). At least he breaks the mould in one respect: he wasn’t English, but Welsh — and aggressively so.

Perrot wasn’t top of anyone’s short-list for the job. Unfortunately — perhaps because it wasn’t financially attractive enough, or simply because his qualifications were unique (see below)— he got the posting as new-minted presidency of Munster..

The Elizabethan agenda (i.e. that of Cecil and Walsingham) was:

Perrot was offered the Munster post in December 1570, after Gilbert had quashed the worst. He himself wasn’t enthused by the prospect; but in February 1571 he arrived at Waterford in the company of Black Tom Butler, tenth earl of Ormond and (since 1559) treasurer of Ireland. He made his oath to Lord Deputy Sidney (who, himself, promptly debunked from Dublin for England and some civil society), then made his way to Cork.

Over the next two years Perrot extended Gilbert’s rule of blood and iron: he had over 800 rebels swinging from gallows. FitzMaurice Fitzgerald was a tougher prospect, and wasn’t brought to heel until Perrot’s siege of Castlemaine, and the humiliating surrender in Kilmallock church, with Perrot’s sword at his heart. Perrot made doubly sure by taking hostages, including the younger Fitzgerald.

Perrot was now well-and-truly knackered: he complained bitterly to Walsingham that for every white hair he’d brought with him, he now had sixty.

Never particularly “in” with Elizabeth’s privy council, Parrot wanted out of Ireland. A further motive was dodgy business over the seizure of a Portuguese vessel, the Peter and Paul, and its valuable spice cargo — over which Perrot found himself sued by a Parisian merchant.

Doubtless with sighs of relief, Perrot left Ireland in the July of 1573.

Perrot defected from the family’s catholicism when he was sent to the cathedral school at St David’s, and fell under the influence of Bishop William Barlow. His step-father then found Perrot a place in the household of William Paulet, Lord St John, later first marquess of Winchester and lord treasurer of England. His companions there were Henry Neville, sixth Lord Bergavenny, and John de Vere, sixteenth earl of Oxford (by one of those historical oddities, both were grandfathers of candidates for the authorship of Shakespeare).

By his late teens Perrot had a reputation for violence: on his way to a debauch in Southwark, he had a run-in with Yeomen of the Guard. which brought Perrot to the notice of the dying Henry VIII. He immediately received preferment under Edward VI. At court he sided with the Earl of Dudley, was involved in the plot against the Protector Somerset, and became an MP.

His facility with languages made him an obvious choice for the embassy to arrange a political marriage between Edward VI and the infant Princess of France. Though the marriage was going nowhere, Perrot apparently rescued Henri II from a wounded boar: promises of a French pension, etc. Perrot, back in England was skint (£7-8,000 down the drain): he had to mortgage his Welsh estates. Edward VI kicked in with a small allowance, but — as so often — the remedy was a good wedding (Anne, daughter of Sir Thomas Cheyney, a Kentish grandee). That ended with the wife’s prompt death in childbirth. Over the next decade Perrot devoted himself to his estates and producing illegitimate by-blows (the usual count is at least four). A second marriage, to a wealthy Devonshire widow (Jane Pollard, daughter of Hugh Prust — note how the Devon mafia appear so often in this saga), came along in 1563-4.

If you missed it there, the Cheyney connection was highly significant: it got Perrot elected as MP for Sandwich. However, we are now into the reign of Mary I — and Perrot’s protestantism soon soured any relationship with the Queen and her circle. In January 1554 Perrot was in the Fleet prison, after clashing with the Earl of Worcester’s men. Released, Perrot refused to hunt down the protestants of west Wales (actually sheltering some in his fastness of Haroldston). He was denounced by a neighbour (Thomas Catherne of Pendergast: this one would fester), and back in the Fleet. Out again, it didn’t take long before he was re-arrested for suspected complicity in the Dudley plot.

By this time even Perrot was getting the message, and he recognised a period of removal was advisable: he buried the hatchet with the Earl of Pembroke and joined the expedition to France, distinguishing himself at the siege of St Quentin. Once home, Perrot squandered any credit so earned by taking revenge on Catherne — housebreaking and kidnapping him. Both were summoned to appear before the privy council, Perrot again briefly consigned to the Fleet, and ordered to give sureties for future conduct.

The accession of Elizabeth changed Perrot’s fortunes (though he was again in quod for debt), and he was one of the four gentlemen chosen to carry the canopy of state at the coronation. Under Elizabeth he became the power in Pembrokeshire, adding to his personal estates by the usual legal skulduggeries. His opponents (and there were many) and the adherents of Catherine took advantage while Perrot was in Ireland. He soon put them aright on his return: despite protesting to Cecil/Burghly that he was retiring to “the life of a countryman, and keeping out of debt”, we find his name repeatedly cropping up in Welsh administration.

After years of badgering the privy council with schemes to pacify (and plant) Ireland, in 1579 Perrot was again given his chance. He was put in command of a small flotilla to police the Cork coast against Spanish and “pirates” (the Salee Rovers were already venturing this far north). As the sailing season came to an end, Perrot encountered, and set on capturing, Deryfold — which he did, but then ran into trouble on the Kentish Knocks, and was saved and brought safely into Harwich by the better seamanship of his captive, Deryfold.

Perrot did himself few favours by pleading for Deryfold’s life: his Welsh enemies laid charges of piracy against him personally. That, in time, went into abeyance.

Meanwhile, one of Perrot’s efforts did bear fruit. In 1581 he had submitted a scheme for the “better government of Ireland”. Elizabeth and Cecil/Burghley — always on the look-out for a cheap “solution” to any problem — decided to give Perrot his chance. On 17 January 1584 Perrot, against all his family advice, accepted the the lord deputyship of Ireland.

He arrived in Dublin to receive the sword of state on Midsummer’s day, 1584; and began with a tour of the island. The intent was to impress all-comers, to see and to be seen, to overawe both native and Old English with a public demonstration of royal power which he hoped might foster a healthier respect for English law. Sir Richard Bingham in Connacht and Sir John Norris in Munster were made provincial presidents. Perrot insisted on formal submission by the native Irish, and he prepared to subjugate and plant Ulster.

This is the moment of the Scots invasion, in cahoots with Sorley Boy MacDonnell. Perrot was up for it: with Ormond and Donough O’Brien of Thomond he was off to Ulster, only to be disappointed of action by the withdrawal of the Scots.

Never one to miss an opportunity, Perrot set about sorting out Ulster. Turlough Luineach O’Neill was forced to submit, and give hostages. The MacDonnells were dispossessed from their Antrim lands. Dunluce Castle fell after a three-day siege, and Perrot was able to send choice bits of plunder to Walsingham and Burghley. Only Sorley Boy evaded him (for which, typically, Perrot blamed his subordinates).

We can now see that, as successful Perrot was a-soldiering, he was no great shakes at administration. He intended the reform of Irish finances, a shire-county arrangement for planted Ulster, the imposition of English law across the island, and a protestant university in Dublin. None of this came about under his dispositions. Nor did he revoke Poyning’s Law. Indeed, the parliament he called in 1585-6 was largely ineffective.

The revived Spanish war (which would culminate in the Armada) meant he had to seek some arrangement with Sorley Boy and the rump of the MacDonnells — but by now Perrot had (temporarily) attained his, and Elizabeth’s aims: Ireland was effectively pacified.

By July 1587, after Perrot’s second son, Willliam, died, Perrot was pleading with Walsingham to be allowed to leave “this slimy country”. That took a while, and Perrot distinguished his later months in Ireland by squabbling, alienating and engaging in fisticuffs with his advisers and provincial governors. When he handed over to his successor, Sir William Fitzwilliam, even Fitzwilliam acknowledged Ireland was in a state of peace.