All downhill from here …

He had several oddities.

One was never to fail to acknowledge the solstices.

So, in his honour, here it comes (without the knowing puff on the pipe):

“See the nights are drawing in already.”

… and so, from man’s inhumanity to man, I mused on the curious story of the Hartlepool monkey. If only to escape from the more immediate topics of recent days (as in the re-phrasing of the traditional Chinese curse, “Mrs May, you live in exciting times”).

Legend has it that, during the Napoleonic Wars, a French ship was caught in a storm and wrecked off the Tees estuary. A monkey, dressed in a mock military uniform, was washed ashore. The locals (allegedly “fishermen”, but as likely shore-watchers or — crudely — wreckers) had never seen a Frenchman, held an impromptu court, declared the monkey a French spy, and hanged the creature from a convenient ship’s mast. 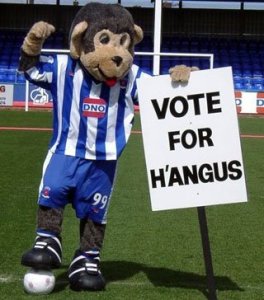 In my more-athletic, less-gouty youth, when we played one of the Hartlepool rugby teams, we referred to them derisively as “monkey-hangers”. Like all the best insults, it was adopted by the insulted: H’Angus the Monkey (as right) became the mascot of the soccer team — and Stuart Drummond, the occupant of the money-costume, was elected as the town’s mayor in 2002. It was H’Angus/Drummond’s other intrusion into the public consciousness: he had twice been escorted from the pitch for simulating sex with a blow-up doll.

All this appears on wikipedia, but the legend of the Hartlepool monkey has too many loose-ends (no dark humour intended) to be left there.

Ned Corvan was a mid-19th century music-hall artist and impresario in the North-East. He produced a series of song-books before his early death from TB. One of his songs was The Fishermen Hung the Monkey, O!  This is adduced as the first public outing of the legend. There are doubts about Corvan’s claim to originality, though.

Corvan learned his trade as an entertainer with Billy Purvis’s Victoria Theatre. Purvis was born near Penicuik, just south of Edinburgh, and migrated to Newcastle — so the east coast of Scotland may be a significant connection. Then there is the earlier Blind Willie Purvis.

Life is too short to unscramble which, but one or other Purvis had a song from Aberdeenshire, which is a clear analogue of the The Fishermen Hung the Monkey, O! —

Eence a ship sailed round the coast
And a’ the men in her was lost,
Burrin’ a monkey up a post —
So the Boddamers hanged the monkey-O

Pauline Cordiner’s blog credibly claims the Hartlepool monkey story was transplanted from Boddam, near Peterhead. And makes the connections.

All the attempts to “explain” the story I find questionable. One sinister “explanation” (and there’s more here than meets the eye) is that ship’s boys were the “powder-monkeys”, and it was one of them who was the victim. And, we may see, for good reason.

Even this far, we already have pegs on which to hang any number of hats, and any odd theory. Bella Bathurst (page 262 in my paperback copy) makes a calculation:

… it is not Cornwall or the Pentland Firth which has the dubious honour of the highest number of shipwrecks per mile of coast. It is Durham, a tiny county with a tiny sliver of coastline, with 43.8 losses per mile. Further south, Norfolk has 25.6 and Suffolk 25, both of which make south Cornwall’s twenty wrecks per mile seem almost modest.

A law with unintended consequences

Add in the basis of “salvage”.

What immediately follows is from Bella Bathurst, but I see remarkable, even uncanny coincidences with Donald G. Shomette’s Shipwrecks, Sea Raiders, and Maritime Disasters Along the Delmarva Coast (see especially page 125).

In 1236 Henry III of England decreed that an owner of wrecked goods could claim them, within three months of a wreck. However, the same rule added that, as long as any man or beast escaped alive, the ship was not truly a wreck. This was repeated by Edward I’s First Statute of Westminster. The intent of the law, presumably as proposed by ship-owners, was to prevent the seizure and destruction of vessels that could be re-floated. The paradoxical result was to create a motive for murder. As long as the odd survivor was around, wreckers could not claim their expected dues. That Bella Bathurst  book (page 11) has:

The ‘man or beast’ ruling persisted for many centuries in different forms, and it was not until 1771 that it was finally and explicitly repealed. Even then, its effects lingered on in the common lore of the land. In more remote parts of the country, nineteenth- and even early-twentieth-century  wreckers were supposedly drowning their victims according to the old rule.

I was very young, probably still at junior school, when I came across a tattered book about East Anglia and its curiosities. It included a bit of doggerel:

From east-to-west, that’s a recital of the North Norfolk coast.

Even in the earlier period, before those small harbours silted up, there were no havens for larger vessels between Lynn on the Wash and Yarmouth at the mouth of the Yare. And certainly none one might wish to tackle in a pounding nor’easter.

So, two explanations there:

On the money day

Back in 344 BC, the Kalendae Iuniae, the Romans dedicated the temple of Juno Moneta on the Capitoline Hill. The site is now occupied by the neat (from the exterior)  basilica church of Santa Maria in Arceli.

She was Juno “the warner” because of the legend — or even a verifiable story, since it had happened just forty years earlier  — of the sacred geese giving the alert of the attack by the Gauls.

During the third century BC, Rome started issuing coins. The mint was set up in the temple of Juno Moneta. So, from that came the terms for “mint” and “money”.