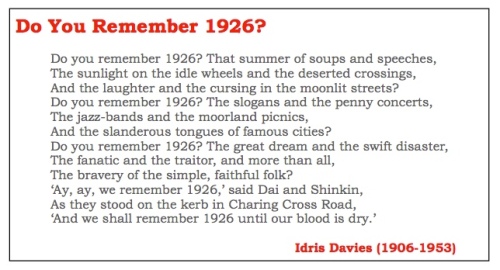 A couple of Russian passport holders — just your average tourists, you know — pass through Heathrow. 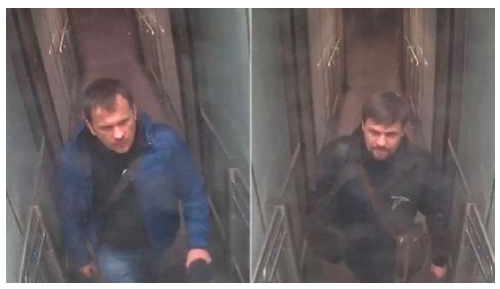 To my first impression, heavies. Bit of a swagger to them.

Quick trip, lads! Were you on a stag weekend?

And nobody — all those immigration/emigration bean-counters ‚ asked why. All that facial recognition and passport computerisation didn’t offer a twitch?

After five years of Theresa Mary May running the Home Office, immigration, and all the rest.

What were we paying her for?

Can we judge a book by its cover any more?

Only yesterday I was having a whinge about Jasper Fforde’s new novel: 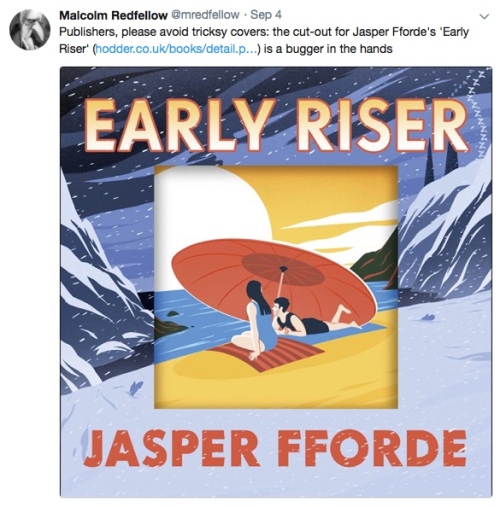 Now I find that, if one removes the dust-cover from Robert Harris’s Munich, this is the hard-back:

No author. No title. No publisher identification. No blurb (at least that‘s a good move).

Arty. But unhelpful. Perhaps the book isn’t expected to outlive its dust-cover.

Tying one’s self in semitic knots

Where’s my well-worn copy of Eric Partridge when I need it? I’m convinced he said something scathing about double negatives. If not Partridge, it must be Fowler: these avicidal surnames confuse an old man.

Which follows from  an encounter, yesterday, with this badge (left). How can one be ‘against’ something ‘anti-‘: doesn’t that make one ‘pro-‘~?

There cannot be many who have escaped awareness of the mess into which the British Labour Party has dragged itself. Nor has yet emerged from the self-induced filth.

Those who, like me, know and love the Party and all its works, also know Kenneth Grahame’s adage needs little change:

Believe me, my young friend, there is nothing — absolutely nothing — half so much worth doing as simply messing about in boats words.

Dissecting a harmless sub-clause can keep a party meeting engaged for hours. The further left the barrack room lawyer, the more Byzantine the argument. Keep blathering long enough, the other side drift home or to the pub. Mission accomplished.

All and sundry should resort, forthwith, to what the Home Affairs Select Committee declared on the IHRA and EUMC definition of antisemitism. If that’s too great a stretch, focus on paragraphs 23 to 25 (they come suitably emphasised in the text).

If even that overtaxes the understanding, there’s the two caveats in para 24:

If the NEC and the leadership (there really should be a term for a one-word ‘oxymoron’) had copied that, and applied it to disciplinary matters months ago, all of this could have been avoided. In short, what happened yesterday, too late and too mealy-mouthed, was to arrive there.

We now need to refer to the document acquired by Robert Peston:

Rare defeat for @jeremycorbyn at NEC. He wanted attached personal statement by him to be endorsed by NEC as clarification of IHRA definition of antisemitism. He withdrew statement when clear NEC would not accept it pic.twitter.com/k74Ky7KoAE

Typically (and we are told these one-and-a-half pages are Jeremy Corbyn’s own homework) it wanders on a bit. for particular study there’s this bit:

… it cannot be considered racist to treat Israel like any other state or assess its conduct against the standards of international law. Nor should it be regarded as antisemitic to describe Israel, its policies or the circumstances around its foundation as racist … [My emphasis]

Huh? Does that apply to the Partition Plan of 29 November 1947? Should we double-think the Egyptian, Jordanian, Syrian and Iraqi attempt to ‘drive the jews into the sea’?

So, a bit of real history here:

Does this fall short of Jeremy Corbyn’s belief (see above) that it is not antisemitic to describe Israel, its policies or the circumstances around its foundation as racist? To my mind, most definitely so. The Arab states had intended a Jew-free (or, at the very least, a dominated Jewish minority) Palestine — note the repeated use of the term Judenrein. Jews were expelled across the Arab nations. Arab media encouraged the flight of Palestinian Arabs: those who remained were denounced as ‘traitors’. On the other hand, Golda Meir (then running the Political Department of the Jewish Agency) deplored the Arab flight — she made the comparison with the escapes from Nazism. The Mayor of Haifa, a Jew, urged the Arab residents to stay.

1948  and the subsequent revisits are nasty, horrible and damnable episodes in Middle Eastern history. Neither side has clean hands.

We need to hear from the Beloved Leader, his puppet-masters and mouthpieces what their alternative history of 1948 is supposed to be.

And — great leaping lizards! — just now they need all the respect they can get.

It’s also a good day to remember St Cuthbert. Probably better today than the ordained day (20th March) which inevitably falls in Lent. Today is the ‘translation’ of St Cuthbert. Those who know their Latin paradigms are already rehearsing:

Poor old Cuthbert got carted around much of Northumbria. He had originally been planted, barely losing blood heat, at Lindisfarne on 20 March 687. Eleven years later he was exhumed, and according to Bede, his corpse was intact and uncorrupted. Almost from the start he became a valuable item: he had numerous miracles to his name, and his shrine at Lindisfarne was a destination for pilgrims. That tourist boon allowed Aidan’s original wooden monastery to be rebuilt in stone — but attracted the attention of Viking raiders.

Too many ‘English history’ books say that attack on Lindisfarne (AD793) was the ‘first’ Viking raid on Britain. Correction: it was the first recorded raid. Because monks were uniquely the recorders and chroniclers of the time, their version was definitive, and their communication-system — especially Alcuin at Charlemain’s court — made sure it was known across christian Europe.

A pause for Viking captives

My bed-time reading (by which I mean the book beside my bed) has been Thomas Williams’ Viking Britain.

Monks may have been of less value as sex-slaves, and men were probably valued primarily as manual labour, often carried back to Scandinavia to work the farms of landowners where they, as well as female slaves, would have been expected to undertake the hardest and foulest work. Recent research has even suggested the institution of slave ‘plantations’ in parts of Scandinavia, where imported workers were housed in cramped conditions and forced to mass-produce textiles for the export market. There they were known as Ƿrælar (‘thralls’), a word that survives in modern English with something close to its original meaning (to be in ‘thrall’ to something is to be captivated by it). The low regard in which these unfortunate folk were held can be gauged by a poem, written down — in the only surviving version — in the thirteenth or fourteenth century, but probably preserving a much older text and ideas. It describes the mythologized origins of social castes in Scandinavia and lists the sort of pejorative names and menial tasks thought suitable for the children of a thrall (‘slave’; ON Ƿræll) or thrall-woman (ON Ƿír):

I think their names were Big-mouth and Byreboy,
Stomp and Stick-boy, Shagger and Stink,
Stumpy and Fatso, Backward and Grizzled,
Bent-back and Brawny; they set up farms,
shovelled shit on the fields, worked with pigs,
guarded goats and dug the turf.

Their daughters were Dumpy and Frumpy,
Swollen-calves and Crooked-nose,
Screamer and Serving-girl, Chatterbox,
Tatty-coat and Cranelegs,
from them have come the generations of slaves.

When I read on ultra-nationalist web-pages and the like about how the Irish were abused over the centuries, I also recall that the slave-markets of Viking Dublin, Cork and Limerick were where this human flesh was sourced.

All the ‘trans-lation’ (i.e. carrying about)

The monks who survived the Lindisfarne raid traipsed their precious saintly relic around Northumbria, including Melrose Abbey. After seven years the procession brought the remains to Chester-le-Street (the church still bears the dedication to St Cuthbert). For a while Chester-le-Street was the seat of a bishop, and the home of Cuthbert and the Lindisfarne gospels. There, too, the Gospels received their first English version.

In AD995, with more trouble from Scandinavians in prospect, Cuthbert was again on the move: first to Ripon, and finally to Durham. By some spiritual means, Cuthbert got a message through that he’d had enough of this shuffling about, and wished to stay put at Durham. So they built a ‘white church’ around him, to be greatly improved by William de St-Calais and his successors in the see.

One doesn’t need to journey far in former Northumbria (‘the land north of the Humber’) to meet with his name featured on schools, churches and more.

Durham Cathedral will, for a small contribution to funds, allow one to see St Cuthbert’s pectoral cross: 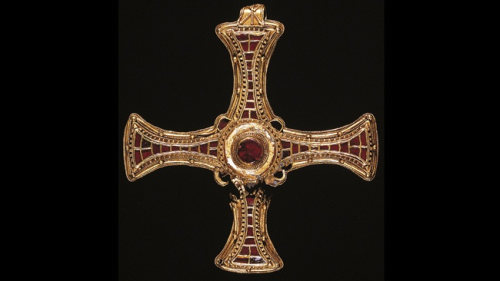 Expect, too, to see that as an emblem on flags and badges of the County Palatine of Durham.

Toward the end of Works and Days Hesiod laid out the lucky and unlucky days, presumably collecting every superstition to hand:

Mark the days which come from Zeus, duly telling your slaves of them, and that the thirtieth day of the month is best for one to look over the work and to deal out supplies. […]

Avoid the thirteenth of the waxing month for beginning to sow: yet it is the best day for setting plants.

The whole prescription is so complicated it seems better to stay in bed.

The essence of all that came down to the early Mediævals as ‘Egyptian Days’, the two days in a month that were ill-omened. In September, these were the third and the twenty-first of the month:

God made Adam the fyrst day of ye moone
And the second day Eve good dedis to doon
The iij day then was Cayn borne
Begynne not on that day till over ye morne [Bodleian, Digby 88, folio 60]

William of Newburgh observed that Richard I (Coeur de Lion)’s coronation (3 September 1189) happened on one of the dies mali (and, if that looks like ‘dismal’, there’s an etymology). It so transpired: a massacre of Jews in London ensued.

Luck depends on which way one looks at it: 3 September was when Oliver Cromwell did for the Scots at Dunbar (1650) and for the last of the Royalists at Worcester (1651) — but it was also his death:

… he did appoint his Son to succeed him, his eldest Son, Richard; and so expired upon the third day of September 1658, a day he thought always very propitious to him, and on which he had triumphed for two of his greatest victories. And this now was a day very memorable for the greatest storm of Wind that had ever been known, for some hours before and after his death, which overthrew Trees, Houses, and made great Wrecks at Sea … [Clarendon, bk xv]

For the UK and France, 3 September 1939, was the expiry of the ultimatum to Germany.

Oh, and I nearly forgot the Princess Alice disaster (1878).

… apart from all the others

As far back as last January The Economist was saying: 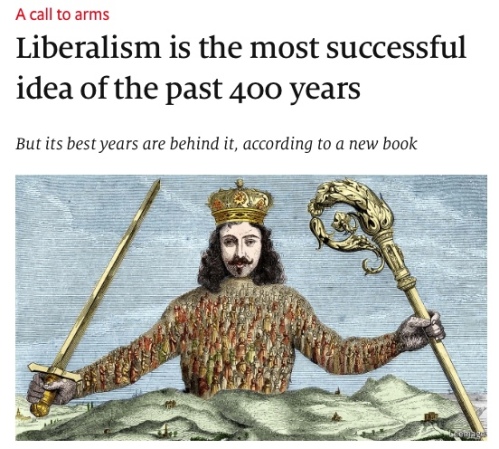 You’ll still find that one popping up on Twitter.

I thought then, and repeat now:

The most successful idea of the past 400 years is scientific method.